.
Sign it for me
and write something interesting
on the inside of the CD cover.
I wrote

on the inside of the CD cover.

Luckily for me
he thought that was funny.
Never knew
you'd become an arsehole so fast
and never thought
you could get away with it
either.
He'll never have to know
that I really wanted to write
-something interesting-
there for him
until he went and asked me too.
But I swear
deep down...
I know,
That it was exactly what he wanted me to write anyway.
_________________________
-Peace
.
Posted by Unknown at 12:32 AM No comments: Links to this post


I made it Perth. 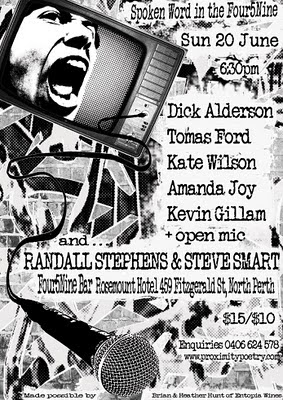 Check this out
"an angry vibe spitting straight talking lines of urban existence" ...sounds awesome. I really am a hard sell I guess, I still don't know how to describe my stuff.
The readings Steve and I had in Adelaide went well, excepting the discovery this morning that my (fucking) recorder quietly ran out of batteries last night, hence there's no record of Steve's set, which is a shame because I can honestly say I've never seen him better, following up on what I felt was a very good set of my own. We are strangely supportive in a competitive way and competitive in a supportive kind of way, and it all seems to be working. I'm really feeling good about being out here, a city I've never been before, with a friend (Janet Jackson) helping us and doing a great job of promoting our art form.
Of course, this all reads like a set up for a big fail, of course I have to say that, it's scary. I'm scared because I'm at the edge of everything I've ever been, and I've been here, un sheltered and constantly pushing that edge away further and further and catching up to it, for what feels like a long time now.
I'm free, whether I believe it or not, I'm living the life I want whether I embrace it or not.

Smarty wrote: "what happens on tour, stays on tour... but I'm always on tour" and I feel like I'm at the point I just have to accept this crazy responsibility-less lifestyle as the real thing, my thing. No one gave me permission, or approval, no one knows where all this leads or what exactly it is I'm trying to build it into, no start no end, just words and roads and friends.
It felt like I needed some time out here to reflect, yet I don't quite know how to articulate this moment, I don't even know that I should share anything so personal, for lack of coherence or entertainment value. But the poetry is still about that -stumbling blindly towards a pure self expression.

I'm long past the point of apologising for it, and I have surrounded myself with friends who don't ask me to, and left behind the people who tried to judge or hold one back.

People mean everything to me, and my words are all I have left to connect me to other human beings, so that means my readers means everything to me, that means you mean everything to me. For you, I'm just about a few more words as the bar across the screen in this net cafe counts up the money I don't have to waste, to tell you what you already know dan-fucken-well, then I have to get back out there.
You must embrace whatever fears and hopes you have and go fuck some shit up. Now. It's the only life you have, the only time you have it for is this moment, you, whoever you are, have earned the right to use it, and are obligated to spend it, you know. 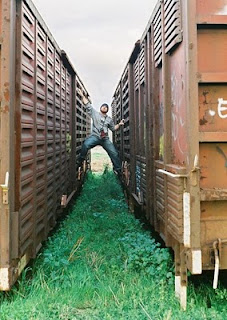 .
...he's still bitter about that too.
Dispatch from the front lines:
One gig down.
Two items of clothing lost.
Three false alarms.
Seven individual alarm/snooze cycles ignored.
Seventeen South Australian bus ticket pricing discrepancies noticed.
Six bottles of red wine consumed.
Two of above bottles actually paid for.
Eight friends in SA caught up with.
One good nights sleep blown debating merits of Will Smiths career.
One follow up conversations had next morning, wherein both parties realised they actually were agreeing with each other the entire time.
Two poets agreeing Ali and Where The Day Takes You were good, and Smith was good in them.
Three attempts to kick Smarty awake failed.
Two attempts successful.
One earnest proclamation of intent to quit drinking.
One snigger.
Forty dollars lent from one poet to another.
Six CDs sold.
Four continental breakfasts consumed.
Two trays of sushi overpriced yet purchased, and consumed, anyway.
Nine far-too-pale looking cups of coffee that still taste shit no matter how much sugar you put in them consumed.
Nine affirmations on Melbourne's superiority coincided with.
One extended session of making fun of Scientology outside their Adelaide headquarters completed.
One car borrowed.
Three confused attempts at engaging pertrol pumps in Goolwa abandoned.
One romantic misadventure attempted.
Zero romantic misadventures successful.
Six and half re-tellings of above misadventure completed.
Four friends successfully entertained with re-telling.
Several hours of lambasting and critiquing of female species subsequently undertaken.
Five hundred and eighteen photos taken.
Ninety four comfortable silences.
Eighteen awkward silences.
One excellent film seen, namely "Exit Through The Gift Shop"
One completed recording of poetry gig,
Two performers in agreement that they will release...
One new album to document tour with.
One suggestion so far for title being "Fucking and Punching ain't Shit"
Zero incidents of above suggested fucking-or-punching yet executed.
Two poets unimpressed with Port Elliot, South Australia.
One case of mistaken ogling transpired when subjects (silhouetted by sunset on the top of a hill), turned into teenage boys, not girls, on closer inspection.
Several comments on hypothetical nefarious intentions towards said silhouettes retracted when observers realised they were boys.
One follow-on suggestion made, advocating said boys be followed to see if subjects may have sisters nearby, maybe.
Nine magazines articles read on toilet.
Several hundred thousands beautiful points of light seen in night sky above Mt Compass,
On one cold, quiet clear night.
Eleven points missed.
Four hundred and twelves smiles.
Two good friends.
Six days down.
Fourteen days remaining.
One friends borrowed Macbook, seriously low on battery power.
Zero -other noteworthy incidents to report.
Transmission ends.
_________________________________
-Peace
.
Posted by Unknown at 2:17 AM No comments: Links to this post

then car pulls up
the lights stays on
the guy looks up
and his face all wrong
just hurry the fuck up
junkie can't stay long
gotta hit that shit up
come on come on.

gotta problem with that?
gotta toilet I can use?

you gotta be kidding me.

now they ujst hold their own.

looming
over me
slowness is my defiance
modern science
doesn't really know, quite
why humans need sleep at night

when
we need to get around
any or all of these
then
you want
drugs,

.
Posted by Unknown at 1:07 PM No comments: Links to this post


When the dust finally unsettled,

When my unwritten epilogues
started into staring competitions
with my unstated intentions
I must have bottomed out the bell curve
back paddling,

It was time to go.

So with passport stamped out fires
I wasted whole oceans away
just watching
sunsets over seas of water-course-language
and I swore
I could lose myself
under those horizon lines
that could never be taken back
was never going to again get,

Once lost amongst all the baggage
somewhere in the unpacking
of these poor metaphors
by the time my voice was found
it was already time to move on,

It was always time to move on.

Back in Morocco
we never made it to Casablanca
I ran right out of time
so we never really had Paris either
but it sounded good
it could
be the beginning
of a beautiful friendship
again
and again
and again.

Saw so many places, faces
woke to so many unfamiliar ceilings
was going ahead at these break neck speeds
and like Rick said
I stick my neck out for nobody.

So I started to see road signs
that point nowhere
or snaked back in on themselves
in this tautological limp
back to... where I came from.

It’s the eternal return,
making a comeback
see,
it ain’t where you’re from
it’s where you’re at
is where I’m at
So
hello everyone,
I’m back.

So I need reminding,
with some directions at hand
infact
that,
I am home.

Recently dusted this off for a reading called 'Poems from Home", thinking this would be an interesting take on that.

.
Posted by Unknown at 3:17 PM No comments: Links to this post