I know you.
You were too short.
You had bad skin.
You couldn’t talk to them very well.

Words didn’t seem to work, they lied when they came out of your mouth.
You tried so hard to understand them.
You wanted to be part of what was happening.
You saw them having fun, and it seemed like such a mystery, almost magic.
Made you think, that there was something wrong with you.
You’d look in the mirror trying to find it.
You thought that you were ugly, and that everyone was looking at you.
So you learned to be invisible, to look down, to avoid conversation.

Did you ever get invited to one of their parties?
You sat and wondered if you would go or not, for hours you imagined the scenarios that might transpire.
If they would laugh at you, if you would know what to do.
If you would have the right things on, if they would notice that you came from a different planet.
Did you get all brave in your thoughts, like you were going to be able to go in there and deal with it, and have a great time.
Did you think that you might be… the life of the party?
That all these people were going to talk to you, and that you would find out that you were wrong, that you had a lot of friends, and you weren’t so strange after all.

Did you end up going?
Did they mess with you?
Did they single you out?
Did you find out that you were invited, because they thought you were so weird?

Yes I think I know you.
You couldn’t figure out what they saw in the way they were living.

Home, was not home, your room was home.
A corner was home, a place they weren’t, that was home.

I know you, you’re sensitive, and you hide it, because you fear getting stepped on one more time.
It seems that when you show a part of yourself, that is the least bit vulnerable, someone takes advantage of you, one of them, steps on you.
They mistake kindliness for weakness, but you know the difference, you’ve been the brunt of their weakness for years, and strength is something you know a bit about, because you had to be strong to keep yourself alive.
You know yourself very well now, and you don’t trust people, you know them too well.

Yeah.
I think I know you.
You spend a lot of time daydreaming and people have made comment to that effect, telling you that you’re ‘self involved’, and self centred, but they don’t know do they?
About the long night shifts alone.
About the years of keeping yourself company, all the nights you wrapped your arms around yourself, so you can imagine someone holding you.
The hours of indecision, self doubt. The intense depression, the blinding hate, the rage that made you stagger. The devastation of rejection.

Well, maybe they do know.
But if they do, they sure do a good job of hiding it.
It astounds you how they can be so smooth, how they seem to pass through life, as if life itself is some divine gift, and it infuriates you to watch yourself with your apparent skill in finding every way possible to screw it up.

For you, life is a long trip, terrifying and wonderful.
Birds sing to you at night, the rain and the sun, the changing seasons are true friends. Solitude is a hard-won ally, faithful and patient.

I think I know you. 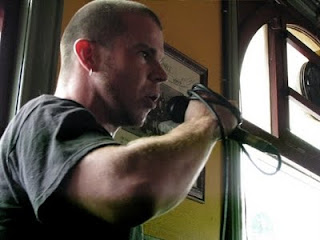 A couple of reasons why I’m putting this on my blog… I’ve performed a cover of this a couple of times at gigs now, its quite satisfying and edifying, when people afterwards tell me how much they liked it.

Incorporating covers of other people’s poetry into your own feature is potentially hazardous, putting your own material up alongside that of Ani DiFranco or Saul Williams can make your own stuff look incredibly lacking in comparison (and of course, it is… in comparison). A more serious problem is confusing the audience into thinking that it is your own writing.

I always reiterate –both on stage and in person, that I didn’t write it (wish I had), certainly don’t want to go around place-to-place giving people that impression. I mean shit… enough of my material and physical stage presence is a cheap Rollins-knock off as it is, but therein lays the answer.

People do respond to this piece, I’ve seen it resonate in the eyes of people as I perform it in a way that is both very uplifting and surprising. I know my experience is pretty clearly articulated in Rollins’ writing here. I first heard this when I was 17 and had never before been hit by such a thunderclap of empathetic/sympathetic understanding by a piece of media (now I’ve tallied up three experiences of this, the other two being ‘The End of Evangelion” and “The Matrix Reloaded”) where I truly felt my guts turned inside out by absorbing the material.

Since getting into performance poetry, I always had it in mind to present this to people, but purely for my own cathartic and evangelical (flag-waving) reasons, but imagined it would be dismissed, as so much of Henry Rollins work and the above two examples are, as self-indulgent adolescent/infantile garbage, but hey… welcome aboard the good-ship Randall.

That this piece speaks to an audience of poets is very gratifying, and humbling, to help Rollins reach a broader audience or throw a different light on him. The catharsis is still there to be sure, I still find it exasperating (and sad) that the slightest hint of testosterone in poetry/spoke-word will instantly make the majority of people switch off to you/your work. I really believe we have a long, long way to go in dealing with gender and sexuality in this society, and it’s not as one-sided as either Iron John or The Female Eunuch would have you believe.

So, if I scored a concordant win for Henry and I on stage, why not attempt to extend that onto the page (err screen, that is). Also, I do like to acknowledge the help I receive, pay my dues and respects, to what I see as the constituent foundations of my poetry.

So, in summation, I love this piece of writing, I love its beguiling simplicity and directness, the way I love the directness of Hemingway’s writing or the un-styled execution of Clint Eastwood’s directed films. I like stuff that speaks to you (me) and is less concerned (if at all) about showing up how technically fancy it can get.

It’s important to remind myself, in public notice, to keep aiming for that directness. Say something when you’re talking, and say it clearly.

Anyway, hope you enjoy it, that it makes you give Henry Rollins a second (or first) look.