The PC repair man thanked me for not crying in front of him, because apparently he has that happen a lot.

See, calling it a first world problem wouldn't have helped, but telling me about a mother whose computer he worked on, had lost all her baby photos, yeah that did.

He wasn't able to recover much from her PC, but one of the few folders he retrieved turned out to have some naked photos of herself. That's embarrassing.

She cried, I didn't.  I wanted to though, only reason I didn't is that I generally can't in front of other people. It's like urination stage fright, or performance anxiety.

So, I've lost over six weeks work on sorting out photos for the book I'm putting together, what I've been working on since early May.

I'd been saving into an external hard drive that I accidentally pulled off the desk via the power cables at the back, while rearranging a plant and a lamp. It landed with an almighty whack and it now refuses to open. Dozens and dozens of hours work. All gone, because I wasn't watching my feet properly.

He was the arch -IT/tech looking guy. Obese, shabbily dressed, haircut like a schoolboy and laconicly unhurried in his work for the $160 per hour he was charging for his services. I can't imagine how he'd handle people crying in front of him. Then again what do I know.

No crying, but went and  hyperventilated a bit though, in the corner behind my bookshelves where he couldn't see. Behind my weights and back rollers and piles of DVDs and y'know, everything I own that doesn't make this a cliche single guy's pad. Fuck it.

Anyway I hope he didn't hear me, He was phoning in his job summary. Just reiterating loudly to his boss that we couldn't get anything of the drive.

I was pacing my place waiting for him to leave making fists, breathing deep through my nose, probably most people who be very uncomfortable being in the same room with me. If he noticed my body language at all he didn't care.

Figured I'd cry or smash something after he'd left, but I didn't. Went straight down to JB to buy a new 2TB hard drive to start over again, from scratch. Because that's doing something. Because it feels better to do things. Like actual functional, emotionally intelligent people do. So today I'll pretend to be one of those.

Still pretty numb though, at least I don't feel like crying or breaking anything now. Don't get me wrong, if I thought it would make me feel better, even temporarily, then I would. Ultimately it'd just be another mess I'd made that I have to clean up.

As soon as I finish this piece of writing I have to crack open that box and start over. Writing helps. The time I didn't cry because I didn't lose baby photos and no one random saw my tits and I hooray still live in the first world. (Although first-world is a term that refers to the cold war era -with the Soviet Block and allies being the second world, so technically I don't live in the first world anymore.)

Posted by Unknown at 8:13 PM No comments: Links to this post


then burn it off again 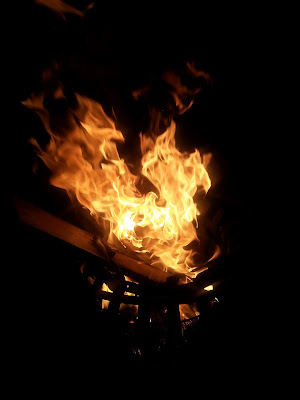 
Sorry folks for things being so dead quiet round these parts in June. I've been busy sorting through travel photos and lots of stuff in preparation for a future book and other writing. Expect some more poems and pieces of writing here soon, promise.  Stay tuned!


Posted by Unknown at 6:45 AM No comments: Links to this post

I did not hear tonight's question

but my answer is no

.
Posted by Unknown at 5:10 AM No comments: Links to this post

If I wasn't feeling lousy when I rode here, then by the time I got done with two police officers here debating the semantics of where the train station starts and ends, and where I stopped cycling to avoid a fine, did the trick. 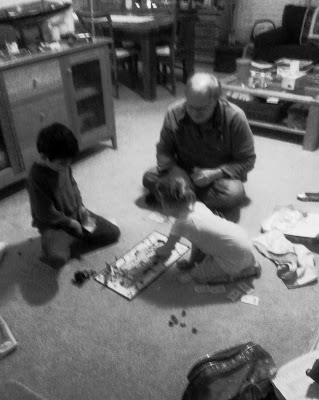 Feel lousy, but dodged the fine. Think it's easier to talk a cop down now that I'm older than most of these constables you'll meet out on street patrol. I can 'speak with authority when questioning it' but my insides still churn while I'm doing it.

I'm numb, and this weekend has driven reasons to be happy in and out of me like an air exchange under my breath. Spent the afternoon with my family, sat for the last half hour before I left watching my father playing Monopoly with his two grandchildren.

He can laugh. I tell you he laughs, animated and bright in a way I never saw myself when I was the childrens' age. That jovial spirit, he was never this lively before my niece and nephew came along. Was that sense of play always there under his gruff and cynical surface? I'd like to think so.

Like when I play with a cat, rubbing noses and dangling string, and wanting that part of me out front all the time. It would be a great way to operate in the world, all the time.

Except for when dealing with cops trying to impose on you, then I need to be as intimidating and assertively confident as I possible. I can do that. 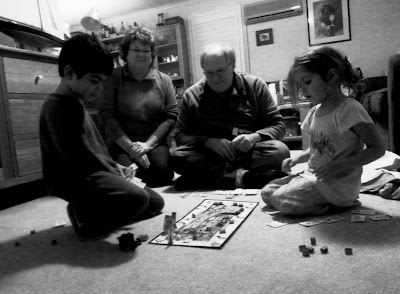 I love being out cycling through the dark under amber light on cold quiet streets on a night like tonight. But I don't like that I'm going home to an equally cold and deserted home.

I like making peace but also like standing up for myself. I wish I had a cat to pat right now, wished I'd joined in that instead Monopoly game instead of just watching to the side having a beer quietly. I sat there the way my Dad would've when he was, say, the age I am now. I'm still uneasy around young kids, like they'll see what an emotional fraud I am. The way cats do.

I wonder if, or where I can cross over into that more playful territory. Instead of standing of standing my ground at a train station, debating boundary lines here, out in the cold.

Posted by Unknown at 5:10 PM No comments: Links to this post

the worst thing
that ever happened
to me
told me she'll also be
there, tonight

because no one's throwing a party on my moral high ground