.
"Asking all these questions ain't highly recommended,
They'll eventually get answered if you put time into friendship,
That is if what you're doing is helping,
and it's not like you know until you...
.
uh, reach the ending."
.
-Sage Francis, Agony in Her Body


You want those eyes to adore you,
Those eyes… do not adore you.
They look like a vacancy sign,
At this hotel,
Eyes not a home nor a shelter,
From the storm you're stuck in,
Just a sign road side,
Saying you can stay,
Overnight,
If you must.
That vacancy looks back at you,
Through flinches in a tangled blanket,
A mangled top and twisted bra on the floor,
Two matching shoes at opposite ends of the room.
And you feel her body move,
Feel twitches and see spasms,
In front of, on top of, and under you.
A one night standard,
What you’ve wanted for weeks,
Finally a reality now,
As real as this mattress beneath you both.
But that,
Feels thin and you suspect its possibly hiding stains,
It’s a bit like her, liking you,
In this dim light you’re in.
Those eyes,
Are tinting her twitches bitter,
You’re unseen and drowning in her out-of-focus,
You’re the cause of all this friction,
The lengths you go to in her,
Eyes boring back into you,
She looks like,
You look like,
A ghost story,
That scares her.
Some fable to explain,
What you can and cannot have,
Some woman usually sleeps in this room,
You met her earlier tonight.
Beautiful, sharp and utterly alive.
But you are here tonight,
Because that woman was drinking tonight,
Because she has a roommate who is out,
Tonight,
And because tonight she had nothing better to do,
Than make a mistake,
Out of you.
You are her fatalism,
As a vessel leveled against the dregs,
Of four beer bottles that have all,
Accidentally fallen off the walls,
That she keeps -up,
To keep men like you -out.
Wanted in and you got in,
Everything here she’s letting you have,
That long hair and ear lobes,
Hips down to labial folds,
Her legs that should be all-yours.
.
However her eyes keep withholding,
Not needing, heeding or holding promises.
You’re seeing a little lust,
With no fear at her fearlessness,
For what happens when you come out,
Not exactly regret,
But a look simply embodying you,
As… the time-being.
.
Wide eyed windows to the soul,
Remaining shut to you,
You’re thumping knocks become frantic,
Begging as physical exertion,
Each thrust says please,
Let me please her,
To please me, hear me,
Show me, see me,
Showing up there,
Behind that stare,
Please!
But these pleas, for her daytime eyes,
Are unanswerable,
They’re not yours to have,
You cannot keep,
You cannot hold,
You cannot touch,
This hard earned prize,
Slips away from your grasp, in those eyes.
Was not her, only yourself you have seduced,
Into believing you really could have induced,
A legitimate libidinous reaction,
Feels like her eyes have kind of caught you mid-transaction,
Trading self-worth for her body parts,
Sold in base biological functions,
So you can be looked at this way.
Getting to see you can mean nothing,
To a person that you’re fucking,
Seeing for yourself how you would look,
To the eyes,
Of a whore.
That’s not what she was,
But that’s what her eyes showed you,
And you didn’t particularly like,
What she saw.
.
_____________________________________


Originally posted in November 08, I re-edited this for a performance last week on the open mike, think it went well. I'm going to be re-tooling and re-posting some other recent pieces from here to make them a little more athletic. All part of getting ready for my feature at Passionate Tongues later next month. (ahem, plug).
18.06.2009: After to listening to an audio recording of the piece a few times I decided it needed ANOTHER edit, so here it is, the built-to-last and hopefully final, version.
-Peace

I’ve seen creature gestations on space stations,
Hosting hordes of molecular acid alien invasions,
Enemy fleets meet for epic space battles,
Back paddle, clone DNA from back in the day,
When I saw the finest galaxies of my generation destroyed,
By android paranoid conspiracy theories.

The archetypal young hero Baptist-John's prodgiy,
Usually according to the standard-affair prophecies,
A darkness-reigns universe,
That he needs to be put in reverse,
I've seen these many scenes spaced-out,
Filled up with doubts,
Of the silent heroes ability to best,
The super villain nemesis,
Linked on branches of the family tree, secretly,
Plot twisting past plot-holes in popular fiction back stories,
Allegories,
Character developments of annoying-comic-relief-sidekicks,
Distopian consciousness beliefs suspended in virus-time-space-rifted-hyper-driven-faster-than-light-blackhole-space-pilots-pirating-who-get-the-girls-into-fantasy-hydro-rocket-fusion-reactor-planes.

And my brain,
Itself last seen on the planet Tatooine,
A passage from Arakis to colony LV 426,
Before touching down on Cardassia Prime one last time.

I’ve seen it all,
And no matter what changes with age,
These places still all hold the status,
Of being my own planets.

These,
Have been my homeworlds,
And that,

Is where I’m coming from. 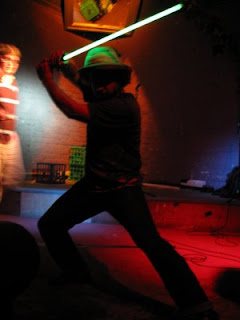 So I wrote a draft of this back in July last year on the road while having some prety bad withdrawal from my DVD collection, and tweaked it a little for use in a Star Wars themed poetry slam I participated in recently ~ though I didn't manage to finish reading it for heckling and disapproving sounds from the audience, which I responded to by yelling abuse at the audience en masse. So here in blog-form my affectionate tribute to sci-fi finally has a home, and in you gentle reader, an audience that can't fluster me quite so easily on paper... or pixels.

.
Posted by Unknown at 7:06 AM No comments: Links to this post