Hello,
My name is Randall $tephens, I was advised by the powers that be to put up my bio for my upcoming show on February 5th. I am doing this of my own free will and without being manipulated in anyway or coerced. Or threatened. Repeatedly threatened. With violence. I have not been repeatedly threatened with violence in order to put this online to support the democratic poets republic of Sospeso. I wish to state this for the record.
To my family please be assured that I am being treated kindly and fairly and I look forward to my eventual reunification with you upon my release.

13.7 billion years ago a singularity of infinite density existing without time or space exploded for unknown reasons, creating the universe. For a while not much happened. In 1980 “The Empire Strikes Back” came out, and Randall $tephens was born. He is a poet. His many and varied pursuits include writing poetry, performing spoken word poetry, writing spoken word and occasionally typing it too.
After travelling around the world, Randall returned home and is currently living in Denial, while visiting other emotional states in Australia. Find out even more about Randall $tephens, or make a large non-tax deductible donation to him:
http://www.randallstephens.blogspot.com/

or email him at:


See you on February 5th, I'll be back here before then to give you some details of what I'll be doing at the feature. Looking forward to seeing you all there. It's going to be a great show folks, don't miss it. 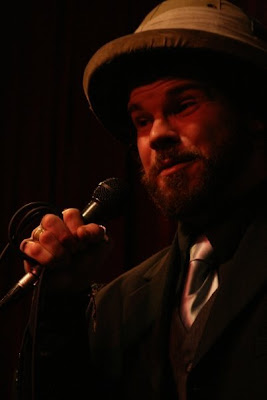