Mr Dollars is going to donate any payments or sales he has received while in New Zealand, dollar-for-dollar (i.e for every 1.00 NZ$ I will donate 1.00 AU$) to help the people of Christchurch recover/rebuild from this awful disaster. It's currently around the $500 mark.

I will also be donating my cut and CD sales from the 2 Sydney gigs I'm doing early next week (Text Styles #5 -Monday 28/2 and Word in Hand Tuesday 1/3). As both these gigs have door charge -please tell your Sydney friends to come along.

I'm also thinking about organising reading a selection of my NZ-written poetry as a benefit gig when I get back to Melbourne, if you'd like to be involved (know a venue that could help us?), please get in touch with me ASAP. 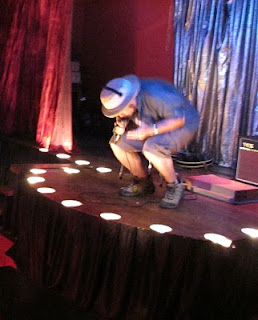 My love, condolences and best wishes for the people of Canterbury.

.
(well look, at least I'm not mis-labelling anything, ay) 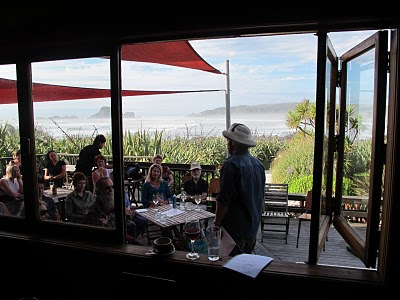 (from the Bayhouse gig, Taraunga Bay, Westport gig -04/02/2011)
DISPATCHES FROM THE FRONT LINES:
...in our last installment I was cliffhanging myself off the deep end in the waters of lake Wanaka.

As always, it went well, and as always it was a small-ish crowd, which was threatening to be a really smallish crowd, before I went and started spruking (all the more confusing for the local tourists because they don't use the word 'spruking' here) Yes I said local-tourists, I know what I mean, even if you don't, and hey stop interrupting me! Because yeah it would have been an entirely female audience otherwise and considering I was about to launch several volleys of severed head black-plague ridden and on fire attacks over the castle walls in this pitch battle of the sexes called 'romance' I needed some equalisers.

As it is, we got a few more coming up stairs and up-stares and I delivered a fairly well modulated selection of valentine and anti-valentine pieces, and kinda toned down the misogynistic rant-stuff, for the most part I played nice with the opposite. No, the tone of the night was irreverant enough, my Obsession song I think just strayed a little too far into... wherever that thing goes, while 'Breasts' was the single strongest performer by far, and one I never get tired of doing.
(ah the sentences you can end up typing sometimes...) 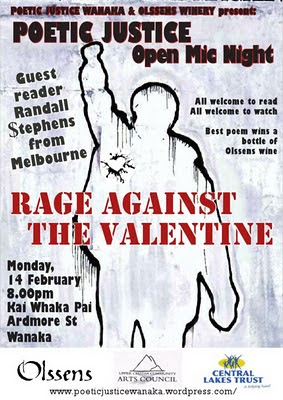 So where am I now?

Well, despite best laid plans it's no place that's called Dunedin, I'm afraid. I'm am this morning hiding in my uncle's study in Christchurch. Truth is, I just kind of hit a wall last night. No, not like in the way I fused my left metacarpal bone in the lobby of a Bourke Street nightclub three-and-a-bit years back, I hit a proverbial, metaphysical wall, struck that unfortunate up rush of reality, where blowing your savings on a trip to perform poetry in an odd country on the odd night to the odd group of sometimes-smiling faces for free starts to feel oddly all too much like chalking sidewalks in a language no one speaks in the pitch dark of a cold night... and doing so badly.

So meh, I decided it's a day or two out, catching up on writing and admin, and save my wallet some heavy lifting. I'm sticking around here like so many dried shit flakes on the treaded soul of Christchurch now until the 18th. Dunedin was just gonna be a basically a day getting there, a day back and a short set of open mike stuff for a bunch of mildly complimentary students and backpackers whom I'd then scribble down the contact details of on back or receipts then later forget to add on facebook or couchsurfing while promising they can all come stay at my house especially the cute ones 'cause I live right near the city centre and blah-blah-blah.

Nope, given another day or two (and incidentally a place to stay) I would have loved to get down to Dunedin, but I'm afraid that will have to wait for the next trip. Annoying mainly for the fact that Emilie Zoe Baker told me to go down there, and if EZB gives you advice, you take it, if you know what's good for you.

Where to next you ask me? Again you interrupt me while neglecting to look at my tour dates entry, which is buried back in weeks of entries and now hopelessly out of date and lacking any details anyway, (shame on you nonetheless), well if you'd just let me finish... jeez... I can, yes I will, tell you I'm off to Auckland on Friday. To do a gig?

Wait a second though Randall (again, these interruptions are getting intolerable), but didn't you say you were doing a support gig that night, Friday 18th? Oh yes, but that was before the person who offered it to me over a bowl of non-alcoholic punch a few weeks back, whom I was yeah, ironically, at the time bitching to about kiwis and poets generally being quaintly unreliable, who has now himself decided to go incommunicado on me, after I booked the flight up. So yay, another night off in Auckland. Oh but this time, I'm ready for it... I can see Auckland coming like that bull on the streets of Varanasi that starting charging at me (albeit after I spent to long posing for a photo pretending to face off with it). Dodge. I'm gonna dodge my down time in Auckland and come out of looking every bit as silly as I did on the streets of India. With so much bull.

I'll check in with you before then, but my next actual gig is Saturday 19th for the good folks of IN VOICE AND MUSIC,
check out the link below: 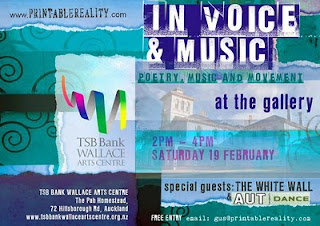 Hello, is thing on?

Ok. Where are we?
If my calculations are correct by the time you read this I will have typed it sometime in the past, in a year before broadband was invented.
I've travelled back in time to tell you and warn myself where it all went wrong,
though I'm not actually sure,
because in the process of trying to warn I've killed myself before I could invent time travel.
Or my grandfather did.
Or before I could invent my grandfather.
But either way, I got here here late and so is he.
Damn it.

Anyway from temoral paradox to temperate paradise... I'm in Golden Bay, up to my neck in it, joined to it at the hip and stuck to it like adhesive Randall (that's brand-randall) or those weird hook things on cat's tongues.

Sleeping in a rental car by the beach and trying to convince Anne to give me a gig at the Mussell Inn, only problem is her name's not Anne but Jane ans while she was too polite to remind me of that, she wasn't too polite to point out that I am not actually a trio of good looking scandanavian girls who play killer strings.
I forgot that.
But my memory problems aside, she is gonna try and squeeze me in, I just have to stick around her a while. Tough break.

Never just turned up somewhere and asked for a gig before.
But there's nothing to it really, I just had to spend an hour having coffee with her to talk enough distance between myself and every other poet she'd ever met by ragging on most every poet I've ever met (nono y'see, I wasn't responsible for the entertainment massgraves left in poetry's wake, I was one of the good Nazis who never saw anything or asked questions, your honour)

If I don't make it back, you call in the airstrike.
My name is Randall $tephens and I got here as soon as I could.
Out.


Ok, in other news, yeah yeah I have gigs coming up, Wanaka 14th, Lyttleton 15th, and maybe Dunedin 16/17th. Before my extended-revenge bout with Auckland begins. Will advise when I'm not paying by the nostril for net time.

No
There. There's a poem. My favourite poem.

.
Posted by Unknown at 6:54 PM No comments: Links to this post